Bungy Jumping in Queenstown: What to expect

Bungy Jumping in Queenstown in NOT an Optional Activity

Why would anyone want to throw themselves off a perfectly good bridge with only an elastic band to save them from certain death?

If you’ve been thinking of bungy jumping but not sure if you can work up the courage to step onto the bridge, here's everything you can expect when jumping with AJ Hackett Bungy.

After you’ve plucked up the courage to make a booking and hand over your money, you’ll need to do the paperwork. You’ll sign an indemnity waiver form and stand on the scales. Your weight is written on the back of your hand, and the jump masters use this weight to determine the length of your bungy rope. You’ll need to remove anything from your pockets, as well as hats, sunglasses or jewellery.

You’ll head towards the jump platform where the jump crew will check your ticket and check your weight. When it’s your turn, you’ll put your harness on with the jump crew checking everything as you go.

Now, you’ll head towards the jump platform. This is where fear, nerves, adrenaline and excitement all start churning around in your stomach. As you realise just how high you are, you may be tempted to give in to fear. Don’t give in! It will all be worth it in the end.

Next, the jump master attaches the system of ropes and towels that fit tightly around your ankles. Each bungy site has a slightly different way of jumping, and in some cases, you have the option to do a tandem jump.

Thankfully, the jump master will distract you with small talk so you can’t over-think what you are about to do. 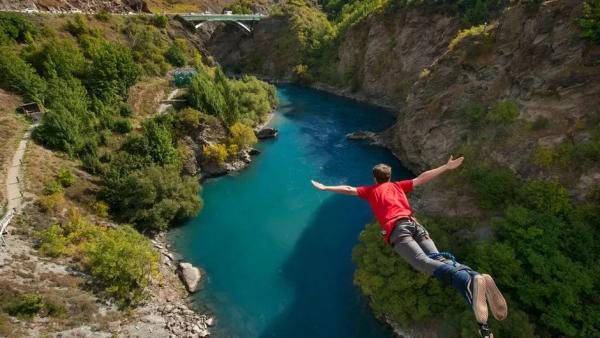 With everything safely attached and harnessed, now it’s your turn. You will shuffle towards the edge of the platform and prepare yourself mentally to leap off it. Even with all the encouragement from friends, strangers and jump masters, the only person who can make you jump, is you.

Time to turn towards the camera and squeeze out a smile. Pretend you’re brave, even if you’re not (it will look better when you’re boasting to friends later).

All the fear, excitement and adrenaline are lost as you make that giant leap. Exhilaration takes over, followed quickly by relief as the bungy cord does its thing. Suddenly, something that seemed scary has become one of your biggest achievements. And you can’t wait to tell everyone.

Depending on which bungy site you jumped at, you may be plucked from the water in a raft, or winched back to the jump platform.

You now have faced your fears and earned your bungy bragging rights.

SO, WHAT ABOUT SAFETY?

When AJ Hackett say they “invented safe”, they mean it. Their commitment to safety is steadfast, and over they years they have created an entire safety assurance system that provides the framework for the New Zealand and Australian bungy jump standards. An independent audit is undertaken at each jump site every 6 months.

There is a load of information on the AJ Hackett website (link: http://www.bungy.co.nz/) about their safety record, safety procedures as well as how the bungy cord is made.

HOW DID IT ALL BEGIN?

Bungy founders, AJ Hackett and Henry Van Asch, were Wanaka ski buddies who were inspired by the eccentric shenanigans of the Oxford University Dangerous Sports Club, said to be the pioneers of the extreme sports in the 1970s and 1980s.

But the Oxford crew had of course stolen the idea from the original bungy jumpers. The inhabitants of Pentecost Island in Vanuatu began the tradition of leaping from a purpose-built tower attached only by a vine. Each year, one man jumps from the tower in the ultimate display of masculinity and to herald the start of the yam season. The tradition goes, the better the jump, the better the yam season.

Thousands of miles away and not a yam in site, the first commercial bungy site was born on the Kawarau Bridge on the 12th of November 1988 with AJ and Henry at the helm. Dismissed as a tourist fad, the bungy duo was given a 30-day license to operate. From the very first day, the lure and thrill of bungy have driven its popularity, and it is has helped Queenstown cement itself as the adventure capital of the world.